We made it to the SUMMIT!

Sunday night we had an early dinner, prepared our summit gear, and went to bed early – around 7:15.  We slept in 80% of our summit clothes, and woke up at 10:30 pm – 30 minutes ahead of the alarm.  We had gotten our briefing the night before on how to dress and what to expect – starts off cold, and gets colder as you ascend.  I was wearing 5 layers on top – 2 base layers, fleece jacket, down jacket and windbreaker shell.  3 layers on bottom – base layer, fleece pants, wind pants.  Toe warmers in my shoes, hand warmers on hand for when I’d need them later once it got COLDER.    We had tea, ate a bar for some energy and at 12:05 a.m, we set out.  It was dark but for our headlamps and we hiked under a nearly full moon.

The beginning of the hike was steep and rocky and I remembered thinking how difficult it would be to come down this stretch.  I was soon warmed up and had to shed the fleece layer and outer layer of my ginormous gloves.  Breathing was labored, but ok.  My legs were strong for the duration and I was so thankful for the training we had done – we were as ready as we could be for this.  About 2 hours in it was getting colder as Frank had told us.  He had advised that the best way to ascend was at a steady consistent pace, that this was better than going faster and taking longer breaks.  Better to ascend slowly and stop only for a few minutes at a time.  I understood this fully when I started to get cold and needed that fleece and outer gloves back on.  Stopping to get these back on was EXTREMELY cold. (did I mention I don’t like to be cold???)  And starting back up was very cold and took me a while to warm up again.  I don’t know what the temps were, but my guess is somewhere 15-20 deg.  There was very little wind and the sky was clear.

We settled into a steady rhythm, the 4 of us in a single file line – Amos, Nicki, Tim, Frank.  Pole’ Pole’ (slowly, slowly) we went, focusing on Amos’ feet in front of me and following his steps.  You could see the line of headlamps stringing up the mountain.  I was surprised to see some groups hiking just by the light of the moon.  I found it humorous as one by one, we passed the groups ahead of us.  It suspected Amos wanted us to be one of the first groups to the summit – even going Pole’ Pole’, it was a competition – which for us is funny, because for Tim and I, well… we’re just a little competitive 🙂

About half way my stomach started to feel strange, like I had too much water in my belly,  thought I could be over-hydrating.  So, I started taking drinks less frequently, but unfortunately then the water in my camelback froze.  I had to share Tim’s until his froze at Stella Point, just below the summit.  Frank and Amos had a couple more water bottles in their packs which got us to the summit.  The feeling in my stomach persisted but never got worse and aside from labored breathing, I was well enough to keep going.  Tim and I checked in with each other about every 10-15 minutes – “You good?  Yep”.  This was about how it went, back and forth – too much energy to talk!  Tim developed a cough on the way up (the same respiratory type of cough I developed on the way down), but aside from the labored breathing and exhaustion, he was well.

I thought about many things during that 6 hours – all the things I had learned on this climb, gratitude for God’s protection and our safety, how crazy it was that we were hiking up a steep mountain in the dark! (as Katie would say – who does this??)   But the range of things I thought about narrowed as I went up and eventually it was down to left foot, right foot, keep going, keep going, you got this, God’s with us, we’re gonna make it.  Waves of emotion would come over me as we were going, I couldn’t believe we were doing this, we were almost there.  At one point toward the top, Tim said that over and over he had been telling himself “Don’t Ring the Bell”.  I knew what he meant – don’t quit.  This came from Navy SEAL Admiral William H. McRaven’s commencement speech at UT.  If you haven’t seen it, you should – https://www.youtube.com/watch?v=pxBQLFLei70

Amos  had told us that once we reached Stella Point (18,848 ft), the summit was an easy uphill walk.  I was counting on this!  Just above Stella Point, we rounded a corner where there was a rock protruding on the left and I heard Tim go down behind me.  I turned around and he was laying slightly inverted on the ground.  I asked if he was ok, and he said “no”.   I was panicked and it was a frenzied few moments.  Frank was right behind, grabbed him and pulled him back up.  He was shook up, but otherwise ok.  On the way down, we had a look at the spot where he fell, and we could now see how close he was to a complete drop off to the crater.  I couldn’t believe he hadn’t hit his head or anything worse.

Our path turned from rocks to snow and we could see the early light of dawn.  We walked together up to the summit sign at 6:10 a.m.  We made it! 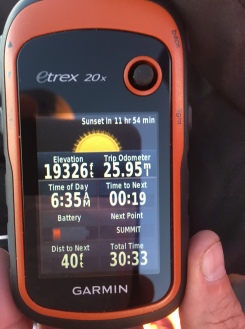 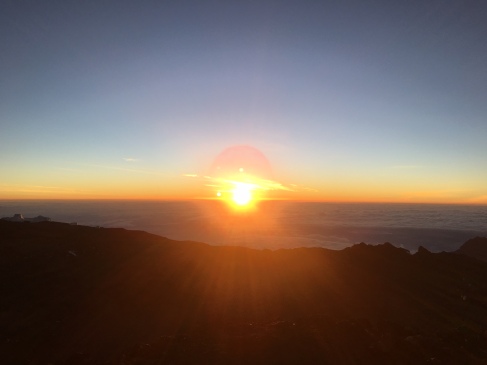 5 thoughts on “We made it to the SUMMIT!”